This tutorial is relevant to write bots with functions and other backends beside Dark.

Also known as Darklang (the SEO term), it’s a deployless backend with its own functional programming language and editor.

In the US, Slack reigns supreme, but in Europe, Teams and other Microsoft products are used a lot among development teams.

And unlike Slack for which integrations are pretty easy and well documented, it is hard to code something for Teams, even more so if you don’t want to use their overly abstracted Botframework library.

So there we go, using good ol' REST API to write a bot!

You need to have a Dark canvas to follow along.

Dark uses a sound type system, so we’ll take advantage of that. Let’s first write something that breaks, like in Test Driven Development. My Canvas is https://darklang.com/a/onepoint-onebot, so my app will be https://onepoint-onebot.builtwithdark.com/, and I’ll ping a first endpoint called /test.

Of course it doesn’t exist, but the important detail is that now in my canvas, in the 404s dropdown, I now have my endpoint with the HTTP method used (GET), and a + sign to add it! (if it sounds awesome, it’s because it is) 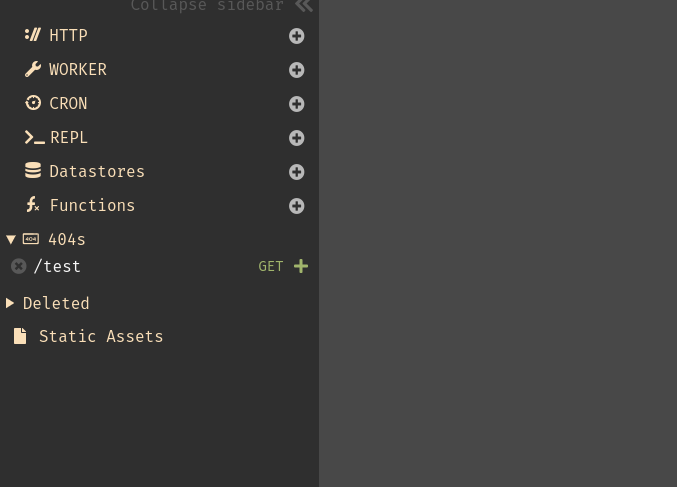 And now, the same HTTP request gives us:

Now we need an app to talk to on Teams, and for the backend, an app ID and secret key.

So now on Teams 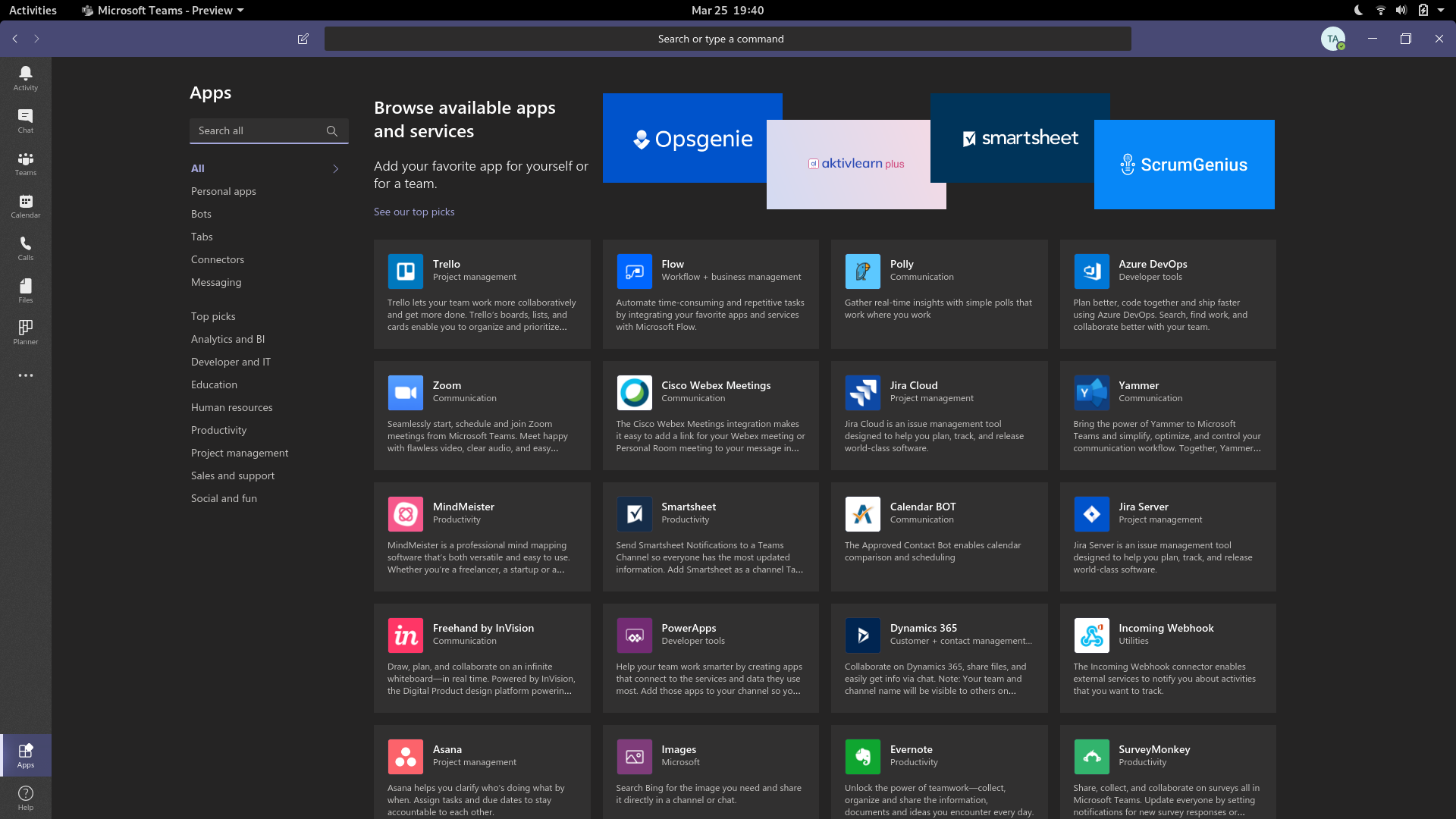 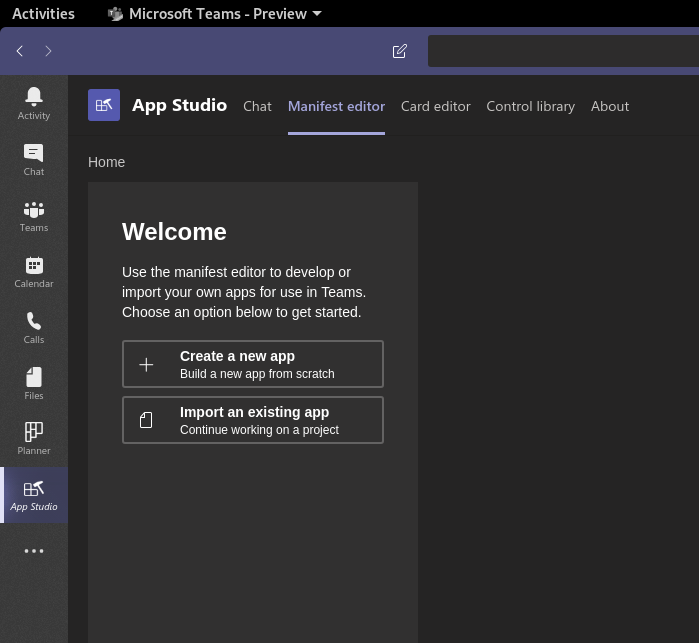 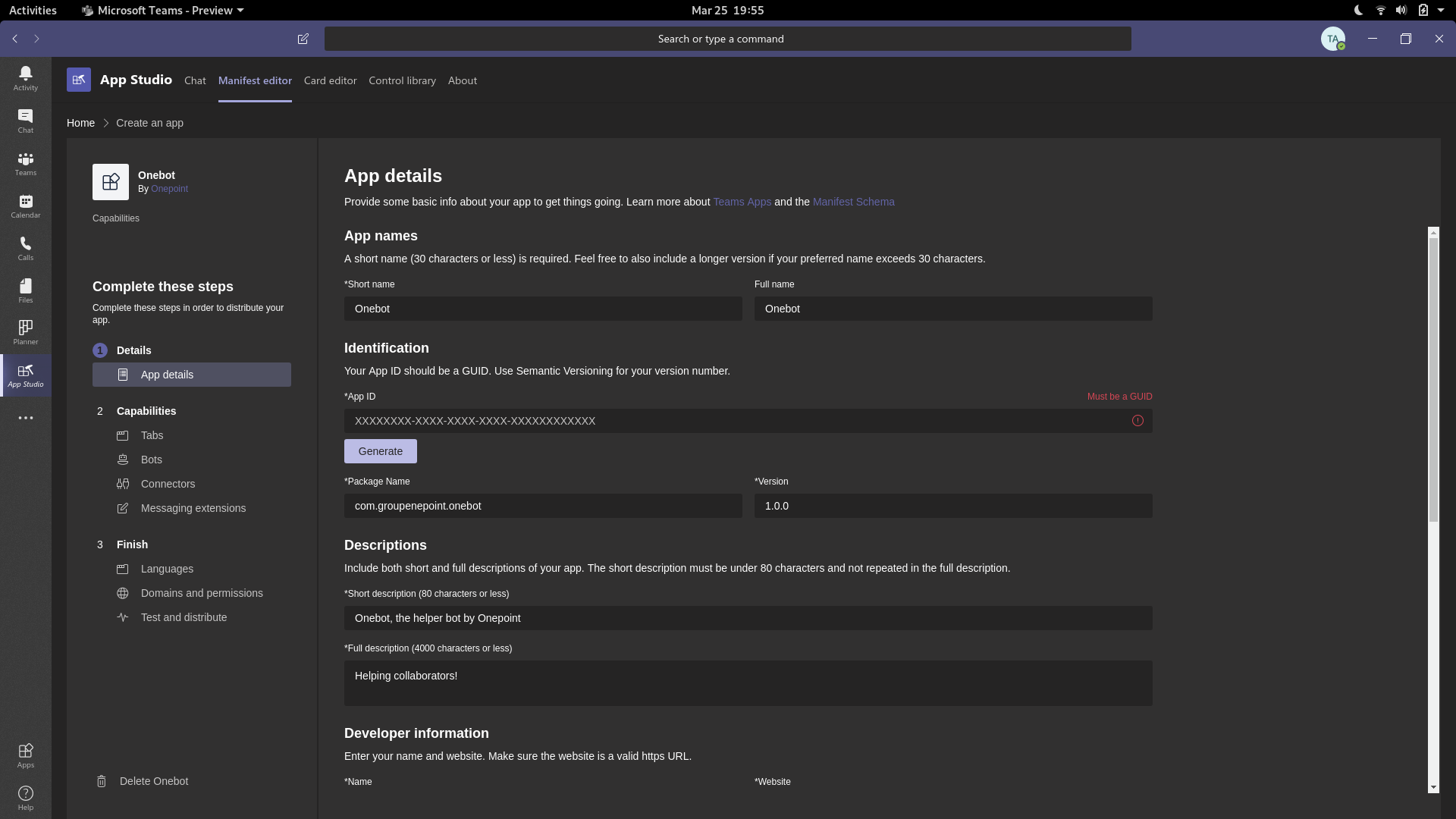 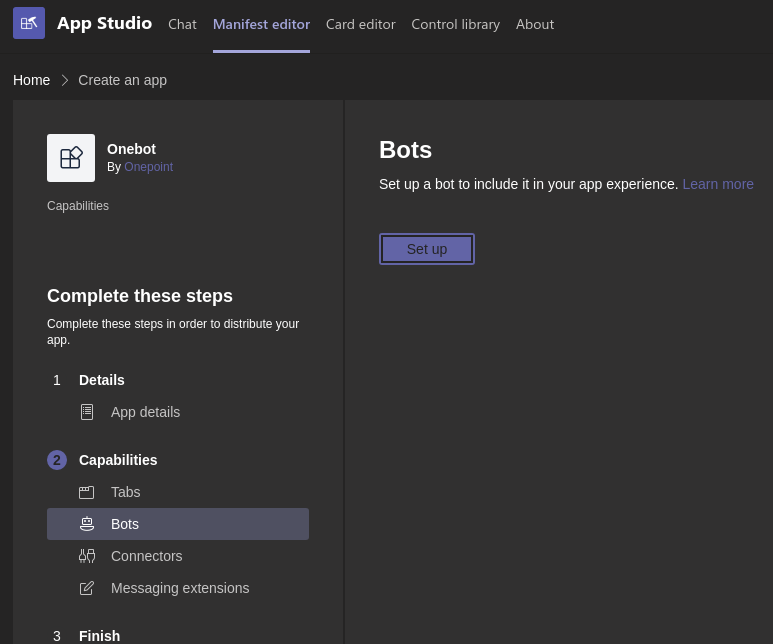 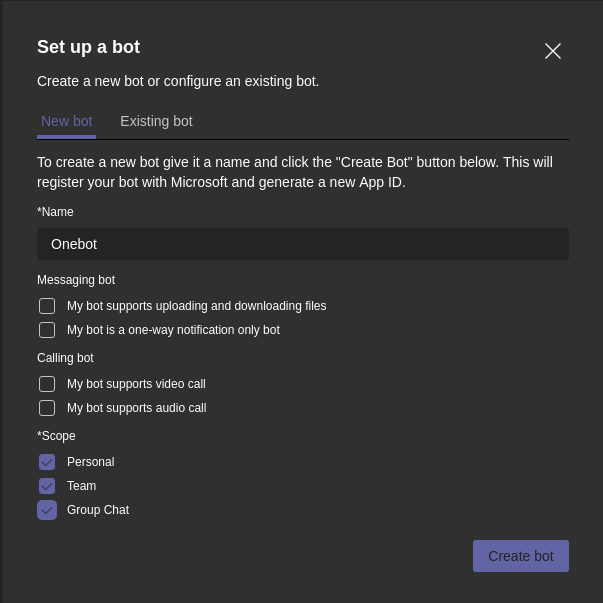 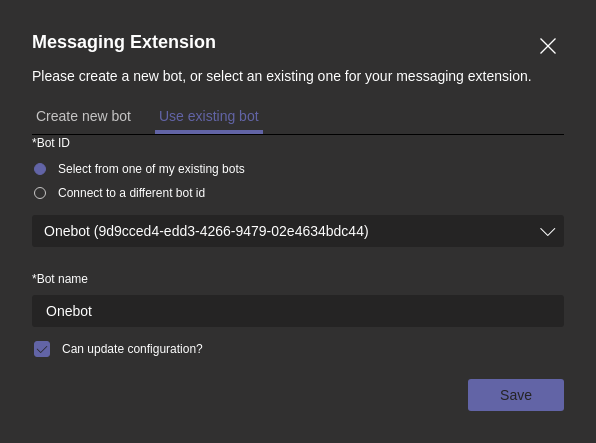 The endpoint should be the same as the bot. Generate a password on this screen too, and copy it somewhere 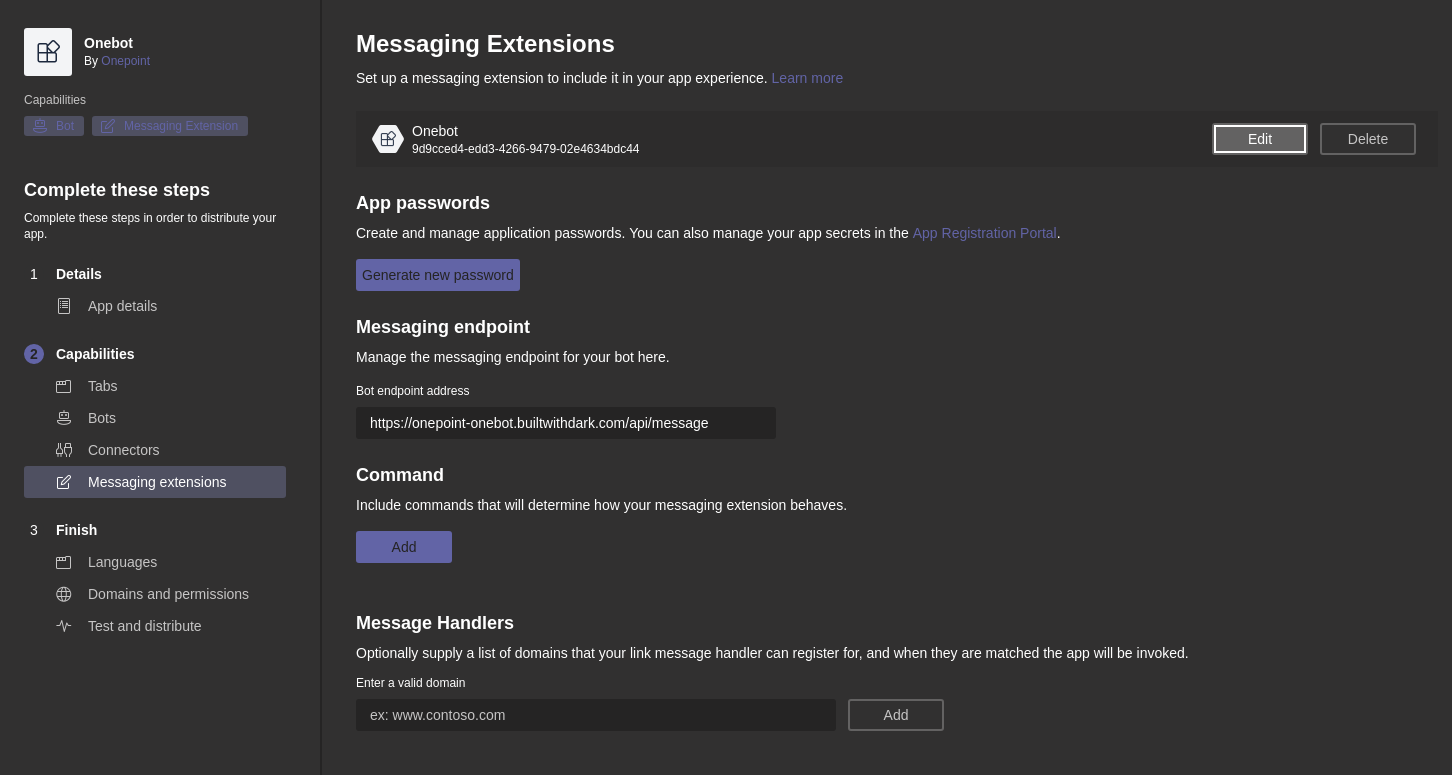 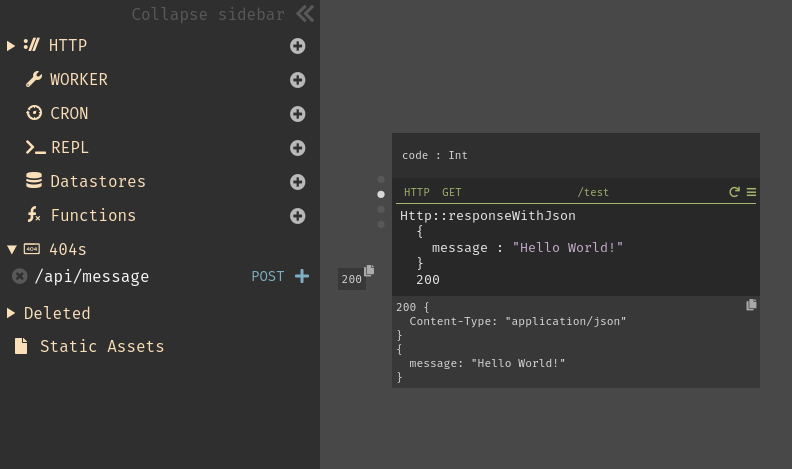 Send a Message Back

By creating the endpoint on Dark, we can see the data of the request that was sent to it, with the dots on the left side of the canvas item 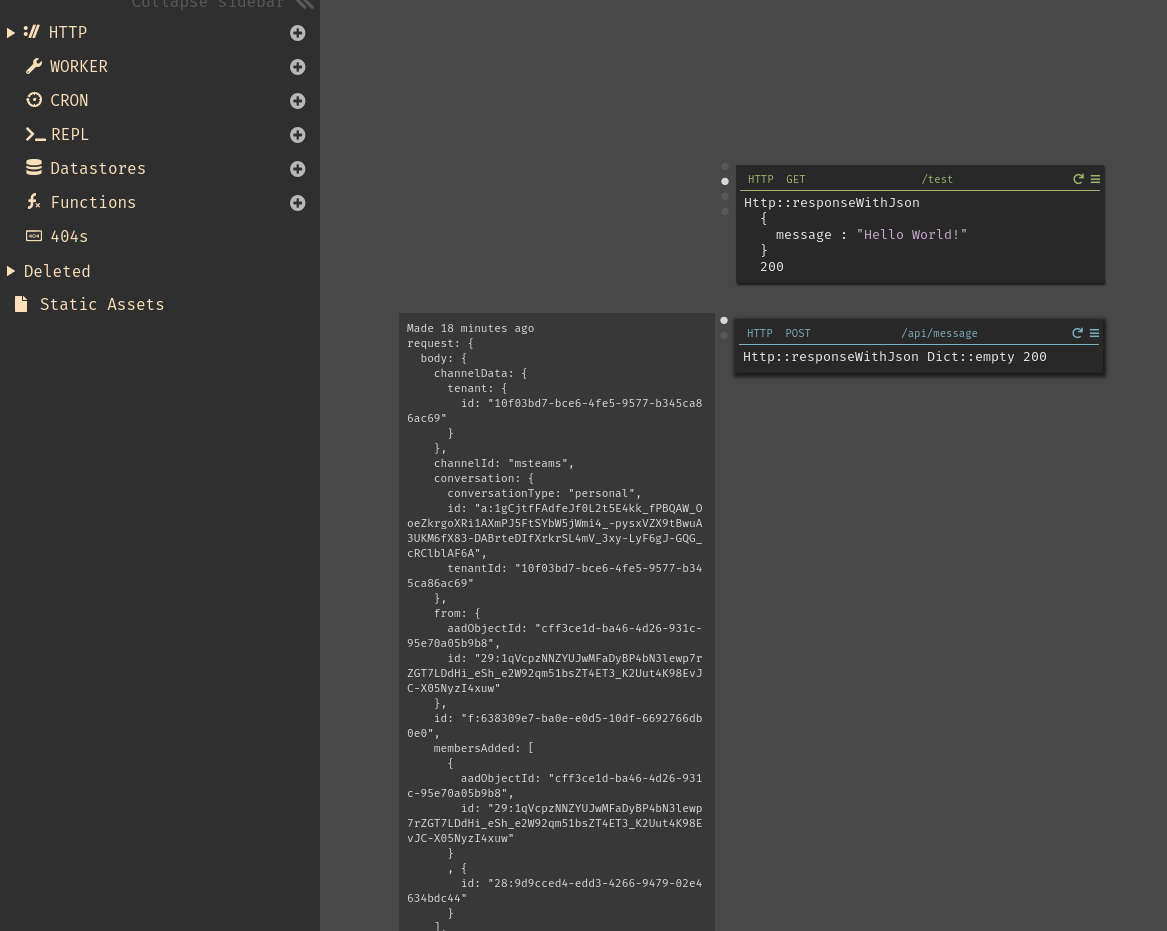 By returning request.jsonBody, we can have a better view of what was sent to the endpoint

This is going to be helpful later.

To be able to send a message to the user, we need the channel and converation data, but also to get an access token.

We’ll take advantage of this opportunity to use other canvas items, like datastores, REPL and functions.

Let’s first create a datastore that we’ll call Credentials, with an appId and appPassword, both of type String.

Notice the green lock on the top left corner, thqt meqns thqt you cqn freely delete this datastore. Once they are populated with data, the lock turns red. To delete a populated datastore, you first need to write a REPL, function or something to delete all items in it, like the following:

Now the REPL to pupulate the datastore:

Each datastore item has a key, which makes it easy to fetch later on.
There you can see that it’s dependant on the Credentials datastore.

… And now it’s locked and populated.

Based on the hard to find Bot Framework REST API documentation, to obtain the access token, we need to make a call of the following type:

Let’s translate this into a Dark HTTP client request, in a function, so it can be called in multiple places, and don’t use space on the main canvas, as functions are displayed in separate canvas views.:

Let’s get the credentials we need, by key:

… And here’s the complete function, we translated the body query-type syntax for a dict.
The last evaluation is returned by the function without the need to use the return keyword, like in Ruby. We’ll be able to call this function and get the access token from it. 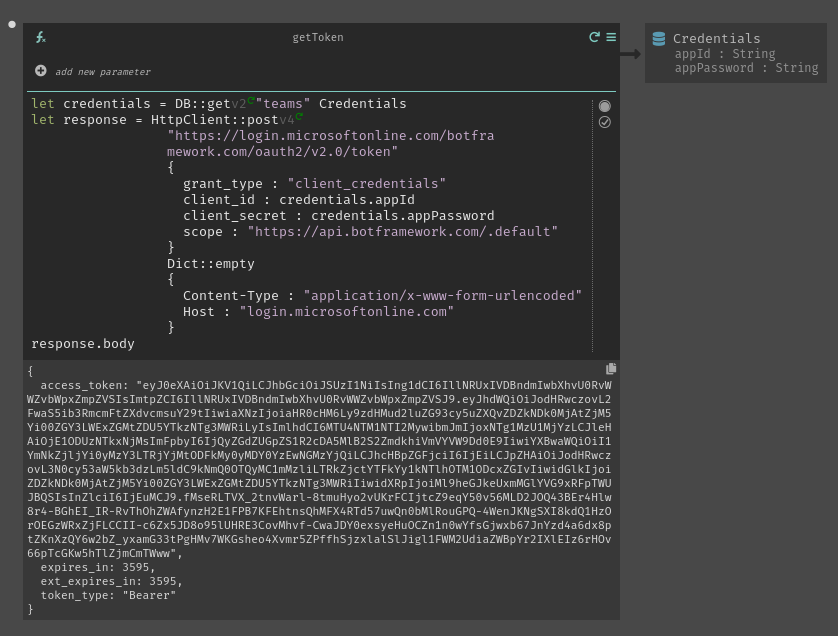 Respond to the User

Based on the Bot Framework REST API documentation, to respond to a user, we need to send something like this:

As you can see, we need to pass the access token in the HTTP request heqder, qs Authorization: Bearer <TOKEN>. So it made sense to write that function before, we’ll use it now.
We’ll also need to grab the activity ID for the URL to send the request to, and the conversation ID for the request and also the JSON object we’ll send in the request body, with the recipient ID too.

Let’s send a message to the bot from the channel by mentioning it, we get this response:

And here’s the actual code in Dark: 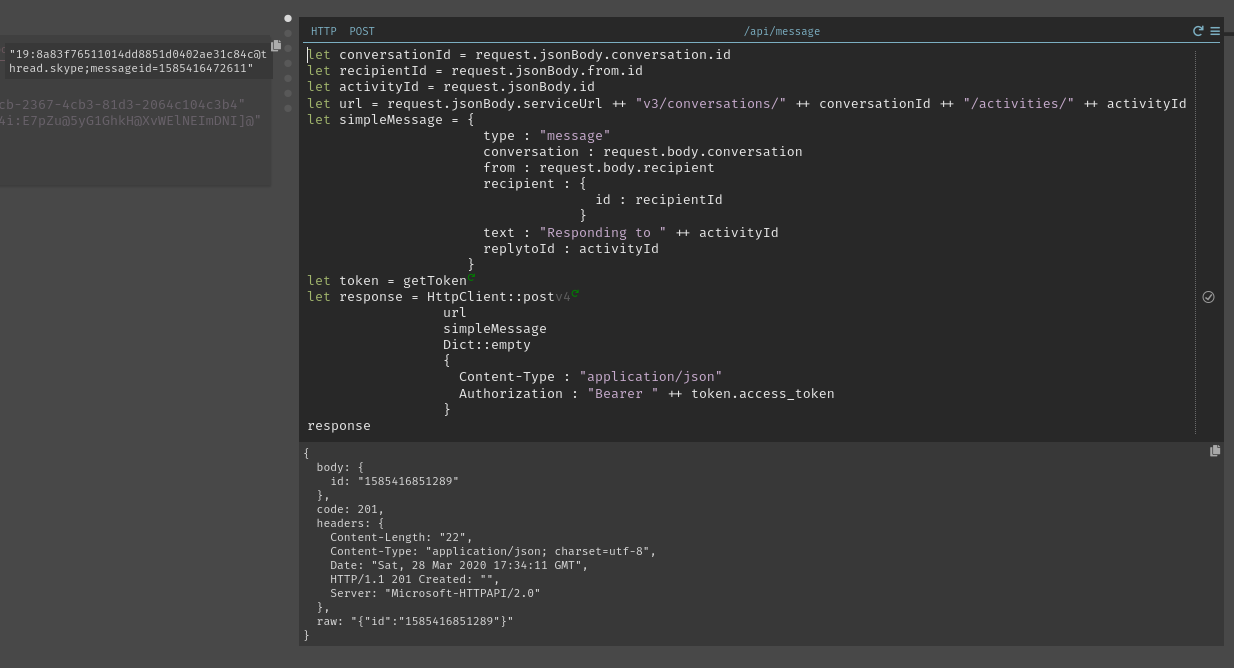 This was fairly simple! And if not, the tricky parts are definitely from Microsoft Teams, not Dark!

Also, this backend can be rewritten in NodeJS with functions, or any backend language and framework, the knowledge and the right data to send to the Bot Framework REST API endpoints is the same.

Responding to messages is fine, but what about sending messages out of nowhere? There are several use cases, a third party service could send a request to the Dark backend, and Dark would need to notify the Teams channel, for example.

As you can see, what we mostly need is the authentication as before, and a channel ID. Ideally, you’d grab it when the bot is invited, or make an init command to define the channel that the bot should use. Here, to not spend time on this, I’ll use our previous endpoint to save the channel ID in a datastore.

There is the canvas function:

Let’s finish on a pic of our canvas